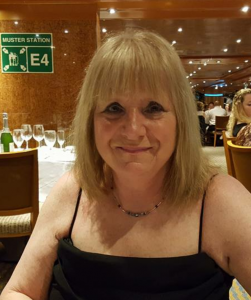 My mom, Cherie Kennedy, was a smart, vibrant woman. But over the past 2 years, we saw a decline in her functioning. Her doctors did tests but none could identify the problem. In May 2018 we took her with us to our son's college graduation in Asheville. Her behavior at that time was strange. She kept forgetting why we were there, what she had for breakfast, and kept repeating herself, then denying she had done so. In June 2018 I got a call from the police, she was hallucinating and trying to call me from her tv remote. The police suggested I have her committed. Her doctor agreed so we went to UNC Hospital. They put her in the geriatric psych unit. As part of admission, she underwent a brain MRI. That is where they identified lesions in her brain. It turned out to be glioblastoma Grade IV. There was nothing they could do for her, so we took her to my aunt's house in Florida to care for her. She entered hospice after a month. She deteriorated from the independent woman she had always been to a shell of her old self. We had to bathe, dress and feed her. She passed away on 9/23/18 at the age of 68.