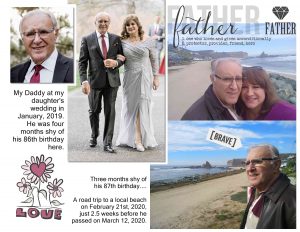 My 86 year old father was in excellent health. He would always get compliments on how good he looked for his age....even by his doctors. He looked like he was in his early 70’s.

In December 2019, Daddy was having symptoms of a stroke. He said it felt like the computer in his head had malfunctioned. His General Practitioner did not want to do an MRI, because it wouldn’t show much at his age and he'd had mini-strokes before. I insisted on that MRI, and the results showed a mass on the left occipital lobe. Daddy was then scheduled for a biopsy a few weeks later, due to the December holiday.

The biopsy came back showing a 2cm Grade 4 Glioblastoma multiforme. MGMT was negative. The only treatment options were 15 days of radiation. My father declined treatment and started hospice care. I quietly asked the neurosurgeon who performed the biopsy how long Daddy had without treatment, and he said 2 months. Daddy didn't make it that long. On the 9th day after being admitted to hospice, seizures started, followed by profuse vomiting. He had a total of six seizures within 36 hours, each one taking more of him away. He was then transferred to a hospital bed, and hospice believed that sedation would prevent more seizures from occurring. He lasted 10 days, sedated in the hospital bed, until he passed on March 12th, 2020. He survived only 29 days total.

The silver lining in it all is he didn't remember anything, not even the seizures/vomiting. His cognitive ability was already declining back in December. I also believe he was never in any pain and remained comfortable, as his facial expressions showed contentment throughout his last days.I was informed by a few hospice nurses that from their experience, the end of glioblastoma can be very, very painful, making it hard for the caregivers to watch. My anxiety was high every day until the end, praying the nurses were wrong. Thanks to the God of my understanding, my father did not have that experience. and had a very peaceful transition.