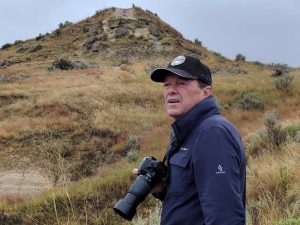 My husband Richie was a strong, young, and healthy 66-year-old. He was a true outdoorsman and loved hunting, fishing, hiking and when we retired, we walked every day. He was an electrician, and he could fix anything in and around the house and had a tool for every occasion.

Living in the Hudson Valley, New York, we had many hiking trails, and we would pick a new one to try every week. I first noticed a change in him about 3 years before his diagnosis in March of 2021. I noticed he would get angry over little things which would have never bothered him before. He also seemed to have trouble with depth perception and was letting me drive more and more. When we found he had cataracts, he had surgery and I thought that was the cause of it. He was an overall great guy and never complained about anything.

In October of 2020, he had a fall at home. A Cat Scan and MRI showed evidence of several small strokes.

Then, while in the hospital he had a seizure – something he had never had before. The physicians were unable to identify why he had these strokes or the seizure, but it explained some of the changes in behavior I had seen over the past couple of years. That started our journey of going to several doctors; Neurologists, cardiologists, hematologists but not one thing pointed to why he had the small strokes.

He was placed on several medications, and we both thought that he was “covered” and that we would just watch how he would do. At subsequent visits to the neurologist, she would ask if he had any more strokes or seizures. To that we replied, how would we know since we didn’t know he had them to begin with. There had been no evidence prior to him having the fall at home and the test results.

We were going along, walking/hiking every day.  In March 2021 I noticed we he started to get tired after just a short walk and then noticed weakness in his left leg and arm. I thought he was having another stroke, but when we got to the hospital the MRI showed a brain tumor. We were both devastated. It had not shown up on the MRI he had in November but now, 5 months later, it was a stage 4. We opted for the standard treatment of surgery, chemo, and radiation. The treatment was worse than the disease. It made him so tired and weak, and everyone said it would subside; that it was normal to happen from the treatment, but he wasn’t getting any better.

By August, he was so weak he couldn’t get himself out of bed. In discussions with the oncologist, he suggested Hospice care, and so, Richie was placed on Hospice care in September. He got weaker and weaker, and he passed on November 26th - 1 week after his 67th birthday and the day after Thanksgiving, his favorite holiday, as he and his brothers would always go hunting on that day. At no time were we ever given any other alternative to the usual standard treatment by his oncologist although we asked. I had gone online to research other treatments but it was confusing and so we opted for the standard treatment. It seemed there were not many options for treatment for this cancer and studies are slow in progression. This is how I came to find the Glioblastoma Foundation. After Richie passed, I hoped to find an avenue where more aggressive treatment and clinical trials would be researched for this disease. The Glioblastoma Foundation is funding more effective treatments for glioblastoma, something that patients and families desperately need. Treatment that could maintain the dignity and quality of a person’s life even if it does not cure the disease. My husband who was so full of life, succumbed to this awful disease and treatment. He was my best friend. I miss him greatly.