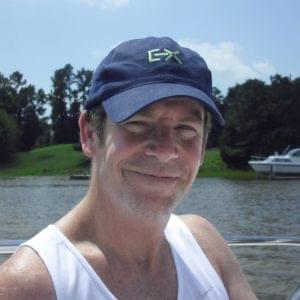 Tom was diagnosed with stage 4 glioblastoma on December 14, 2016. His illness was discovered during the course of a kind gesture that was very typical of him. Tom was on his way to catch the train home from Chicago when he passed a homeless person on the street.  Feeling that he should go back and give the man some money, he turned around and did just that. He was then late for the train, so he ran. He was surprised to find that he could not stop running. He tripped and cut his head on the pavement.

Tom was taken to Northwestern Memorial Hospital for a precautionary CT scan, which revealed a large mass in the middle of his brain. Tom had surgery the next day, and 80% of the tumor was removed. Unfortunately, two smaller tumors were also discovered, and they were deemed inoperable. Tom recovered in the hospital for a week before returning home for Christmas.

Tom had previously had a few back and neck surgeries due to pain but was otherwise a healthy and active 58-year-old man, so his diagnosis threw him and all those who knew him for a loop. He always went to the doctor, ate well, and exercised. His only symptoms of brain cancer were the severe headaches that had begun two weeks prior to his fall, which he attributed to a recent neck surgery. Though he knew what was ahead of him, Tom bravely chose to fight the disease as best he could.

Tom began radiation and chemotherapy during the first week of January and continued this daily treatment until a second surgery became necessary at the end of the month due to rapid tumor regrowth. A shunt was implanted in order to relieve pressure on his brain. After ten days of rehab at the Rehabilitation Institute of Chicago, now known as the Shirley Ryan Ability Lab, Tom returned to finish his six-week radiation treatment, which was completed March 13, a month later than originally planned.

Throughout his nine-month battle, Tom also received a twice monthly Avastin drip. The Avastin helped relieve Tom’s fatigue and kept swelling at bay. It also allowed Tom to remain free of steroids for six months, which is unusual for this type of cancer.

After Tom’s radiation and chemotherapy treatment ended, he continued physical therapy while enjoying time at home with family and friends. He took a trip to Arizona over spring break with his family, traveled to Washington D.C. to see extended family and take in one of his favorite cities, and visited a best friend in Boca Raton, Florida. In between these getaways, Tom spent many good days on his patio, his most-loved spot at home. He walked through the neighborhood as much as his body could take and devoured his favorite meals, along with an occasional glass of wine or beer, at restaurants. His bad days were sporadic; they involved nausea, lack of appetite (everything tasted salty), and feeling too tired from his various medications to even get off of the couch.

On the way downtown to one of his routine Avastin drip treatments at the end of June, Tom started exhibiting odd behaviors, such as talking nonsensically and becoming very agitated. After many tests at the emergency room, it was determined that he had had a seizure deep in his brain. After a week in the hospital, he was once again transferred to the Shirley Ryan Ability Lab for rehab. This stay was over three weeks long and involved daily speech, occupational, and physical therapy.

When Tom came home on August 1, he was unable to walk on his own or do many of the things he once could, including speaking more than a few words. His days were spent managing medications and therapies, watching his favorite show (Seinfeld), and treasuring visits with friends and family. Tom ultimately lost his courageous battle with brain cancer on September 15, 2017, surrounded by his loving and devoted family.

Tom’s legacy will live on through his family and friends, who will preserve and celebrate the many memories that were created in his 59 years. Tom always “paid it forward” and showed kindness to all of those around him, and we encourage you to do the same in his memory.