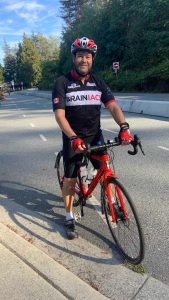 I was at a high point in my career at the Michael Smith Genome Sciences Center (GSC) in April 2003, having played a key role in our successful effort to analyze and put together the SARS coronavirus genome. I had stayed up past 4 am on my own in the lab on a Friday night working with and analyzing the data with the hope of completing the assembly of the genome sequence. When the full sequence appeared on my screen, I yelled in excitement but there was no one around to share my enthusiasm. The following day further analysis to confirm the result was needed and by the end of the day we aimed to publish the complete sequence before the Center for Disease Control (CDC) in Atlanta, Georgia. The news spread fast and put the GSC on the worldwide map. Life was good.

Ten months later, on February 23, 2004, my life changed forever. I collapsed in a grand mal seizure and was subsequently diagnosed with a very serious form of brain cancer—Grade 4 Astrocytoma, also called Glioblastoma Multiforme (GBM). Now I’d have to deal with the fact that I had a cancer with an average survival rate of 13-15 months (if treated). However, being somewhat drugged up with medication, I do not think I fully grasped the seriousness of my situation. Perhaps I was in denial. As time went on, I started to feel that there was a reason I got this cancer. Indeed, I feel this last thought played a role in accepting my situation and in my survival.

Surgery to remove the tumor was a risky procedure given its deep location in my brain and so went forward only with chemotherapy and radiation. I took a break from work getting the treatment, cheering my hockey team to our first-ever championship win (tried to skate in the championship game), found time to start a new relationship and ran a full marathon in Iceland just a year-and-a-half after my diagnosis.

However, while planning to return to work, I had a recurrence in late 2005 and as the original chemotherapy rarely works a second time with GBM (this cancer is very heterogeneous—and any cells initially resistant to chemotherapy have multiplied—the new tumor is genetically different than the one at diagnosis), I was placed on a clinical trial drug, which failed horribly.

The bright side of things at the time was that I got married to the beautiful woman I had met the year before. But through the first 8 months of 2006, I had to take the original chemotherapy drug as a last measure of hope that it would work. It did. I’ve been clear of the cancer since September 2006.

For 7 years I coordinated Brain Tumour Foundation of Canada’s Spring Sprint, a walk/run where I met and got inspired by other brain cancer patients. I did the first Ride to Conquer Cancer after creating a team called the Brainiacs with another GBM survivor in 2009--a 2-day 280ish km bike ride, fundraising for cancer research. More recently, I’ve been involved in a couple of initiatives here in BC centered on patient involvement in healthcare. A very important and exciting initiative that hopefully will overhaul the health system for the benefit of all: patients, caregivers, healthcare teams, and researchers.

It has been a long time now since my life instantly changed forever that day in 2004. I now have a beautiful daughter which adds to my inspiration to continue to live and thrive. Many people over the years have asked me how and what I did to survive—many hoping to hear about specific things that they could apply to their situation, such as specific diets, foods, drugs, and supplements. My response has always been that we are all different and what works for one may not for another. That ultimately, we need to leverage our mind (which can be hard when the cancer is in the brain!) and soul to heal ourselves. We have tremendous power and strength to do just that. Not that medical treatments do not work; I don’t think I’d be here to write this had I not taken the chemotherapy and radiation. But there is increasingly strong evidence that positive thoughts can have a biological and biochemical effect on our bodies.