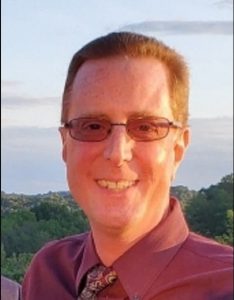 Wayne Weinberger, Jr. was diagnosed with Stage 4 Glioblastoma in October 2018. Wayne started getting horrible headaches in April 2018 and we went to the local emergency department. They wanted to do an X-ray and when I asked the ED doctor what the X-ray would show, he didn’t really have an answer. They gave him some pain meds and sent him home. By September, the pain was unbearable and I finally got Wayne to see his PCP, who sent him for a CAT scan. They sent him by ambulance to the hospital after the scan showed a mass.

An MRI revealed a tumor and the neurosurgeon put him on steroids (Dexamethasone) for 3 days to reduce the swelling until he could remove it. After the surgery, the neurosurgeon told us he was almost positive it was Glioblastoma. When the biopsy results confirmed it, Wayne began radiation and oral chemotherapy. He did okay until July 2019, when his monthly MRI showed the tumor had returned. Surgery was scheduled for the end of September (Wayne was a procrastinator).

This time, things didn't go so smoothly. He developed a cerebrospinal fluid leak and his incision would not close. A second surgery was performed to try and close the incision,  but Wayne developed a Staph infection. He was placed on IV antibiotics for months. His incision still was not closing, and after another unsuccessful attempt, a shunt was placed in his brain to drain the CSF fluid into his stomach to hopefully help close the incision; this still did not work. A plastic surgeon was called in and got it to close for 5 months.

In December 2019, an MRI showed the tumor had returned. The neuro-oncologist recommended a more aggressive oral chemo, as well as infusion chemo. Wayne opted to go to Dana Farber in Boston for a clinical trial. Within 3 weeks, he was incoherent and unable to function. An MRI showed that the tumor had grown 3 times in size in just 3 weeks. It was back to the regular hospital for the aggressive oral chemo and infusion chemo. Wayne was beginning to deteriorate. He was getting weaker, more forgetful, and losing weight.

In March 2020,  Wayne's incision opened again. The neurosurgeon decided he needed a Shunt revision. This was the beginning of COVID so we were not allowed in the hospital. The day after the surgery, the nurses told us he may have had a seizure and had a compound fracture in his back. He was not eating and was incoherent. This lasted for 3 weeks while he was in the hospital where he lost 30 pounds and the ability to walk.

Wayne had walked into that hospital the afternoon before his surgery, lucid, functioning, and was eating. They discharged him to a Rehab facility in hopes to increase his strength. We visited through the window (COVID) in the 3 weeks he was there and on his last day, we noticed that his incision was open and oozing again. We asked the nurse how long it had been like that to which she responded “a few days.” I called the neurosurgeon and he told us to get him back to the hospital.

An MRI revealed that Wayne now had cancer on the left side of his brain. Up until then, it had only been on the right side. The neurosurgeon and oncologist said there was nothing more to do; he should go home with hospice care.

When people hear Hospice they think they do "everything" for you, which is not true. A nurse came once a week to check his vitals and see if he needed any Morphine or refills on meds and the aide came 3 times a week for 15 minutes each time to clean him up, with my help. We had to do everything else like feeding, changing him (as he was incontinent), giving him meds, checking his glucose (it had gone up because of the steroids). Whatever it was that he needed, we did it. Even the last few days, when he was ready to leave this earth and things were rough, we did it all.  He passed away on June 5, 2020. Glioblastoma... there is no cure. Everyone who has it knows it. Family and friends know it. The treatments available now are only buying time. We need something better than that.