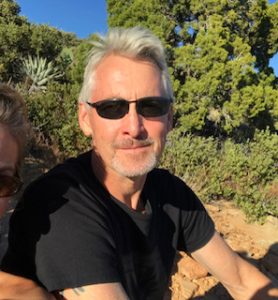 I am 60 years old and have always been physically active. I played indoor soccer once a week or more from my thirties well into my forties, and would probably still be playing if it wasn’t too hard on the hip replacements I got at 51. Since then, I have focused my recreation and exercise on hiking nearby mountain trails.

In early 2021, I began noticing symptoms. Symptoms of what, I had no idea. I would wake up in the middle of the night soaked in sweat for no apparent reason; no fever or flu-like symptoms accompanied these episodes. I was always very busy with my specialty door business, but I began to notice that I had difficulty wrapping my head around the tasks and complexities involving my work. I would describe it as being impaired by a certain foggy-headedness. My wife then noticed changes in my personality: mood swings, argumentativeness, and other traits that were unlike me. On a road trip, my driving began to scare her, which was also something new.

Ultimately, we sought medical help. An MRI was ordered on April 11 and WHAM, I'm being told that I have a mass on my right temporal lobe. "Oh man, that can't be good", I said. In short order, I met my neuro-oncologist who explained what he suspected the mass to be, glioblastoma, which wasn't in my lexicon. He responded to my typical questions about survivability and longevity with the grim statistics associated with it. I have never received news in my life that was a bigger gut punch.

Fast-forwarding now... that was April 11, 2021. My craniotomy was 4 days later with a top-notch neurosurgeon who removed the tumor and discharged me from the hospital a day and a half later. I have received the "standard-of-care" treatments since then: radiation and chemotherapy for 6 weeks, followed by 6 more cycles of Temodar, which lasted through December. I seemed to tolerate these treatments much better than average. I stayed active at work and continued my long hikes and other outings on the weekends. My blood count stayed in a good range for continued treatments and thankfully, my MRI's have shown no growth of the tumor.

I am at this point about 10 months post-diagnosis. I am far from out of the woods, but I am feeling well and staying active. I am no longer on chemo but will continue to have an MRI every 8 weeks to keep tabs on the tumor. Based on everything I have read, I feel very fortunate to have come this far while maintaining a good quality of life.

I’ve always loved outdoor adventures. I was a rock climber at an earlier time and frequented the Yosemite Valley. When I had my hips replaced I had an idea that I could climb the Matterhorn in Switzerland and potentially be the first person to do so with prosthetic hips. Now, I surely would be the first to do it with prosthetic hips and glioblastoma.